#PeaceDay 2021: Rete Pace Disarmo turns one year old by strengthening its work for a nonviolent society

The anniversary of the first birthday of the Italian Peace and Disarmament Network (born from the convergence of Disarmament Network and Peace Network) is celebrated on the occasion of the International Day of Peace wanted by the United Nations. The joint path of the Network was relaunched in recent days during the National Assembly in Rome: broad support for the strengthening of joint campaigns on the road to Peace, Nonviolence and Humanitarian Disarmament.

One year of work of the Italian Peace and Disarmament Network. This is what we are celebrating today, September 21, 2021, the International Day of Peace, an anniversary chosen specifically to highlight the importance of the convergence that led to the creation of the largest network of Italian pacifism.

The theme wanted by the United Nations for this recurrence is “Recovering better for a fair and sustainable world”. Recall that the UN General Assembly wanted a day dedicated to strengthening the ideals of peace, through the observation of 24 hours of nonviolence and ceasefire.

“The pandemic has been accompanied by a surge of stigma, discrimination and hatred, which take more lives instead of saving them: the virus attacks everyone regardless of where we come from or our beliefs – it is highlighted in the document released by the UN on the occasion of Peace Day – In the face of this common enemy of humanity, we must remember that we are not enemies of each other. In order to recover from the devastation of the pandemic, we must make peace with one another. And we must make peace with nature. Despite travel restrictions and economic shutdowns, climate change is not on pause. What we need is a green, sustainable global economy that produces jobs, reduces emissions and builds resilience to climate impacts.”

The International Day of Peace is celebrated a few days after the National Assembly of RiPD (the first one held in presence), which on September 17 and 18 had the opportunity to reflect on its activities, also confronting with representatives of politics and civil society on the prospects for joint work. The internal debate sessions were in fact preceded by a public event with the interventions of Susanna Camusso, Laura Boldrini, Yana Chiara Ehm, Luigi Manconi, Erasmo Palazzotto. The picture that emerges from the Assembly is certainly positive and shows the will of the peace movement to work collectively for concrete results on the road to Peace and Disarmament.

The internal debate was open and constructive and led to the definition of new lines of work and objectives for the future, confirming the commitment to new issues that have already been the subject of internal reflection in recent months: the strengthening of Peace education initiatives, a reflection on the need to strengthen an inclusive and “bridging” role of the peoples of the Mediterranean area; the will to reason on the impact that conflicts and militarization have on climate change and on the issue of common defense and the European army; the opportunity for the peace movement of a renewed proactive role in the framework of international conflicts of the new millennium.

The representatives of the members of the Peace and Disarmament Network also wished to confirm their support for the common campaigns already active. The RiPD will thus continue to work for the reduction of military expenses, for the control of arms exports and the defense of Law 185/90, for civilian peacekeeping interventions in ongoing conflicts, for the institution of unarmed and nonviolent civil defense, for the control of the spread of weapons in our country. The central role of the Network as the Italian terminal of many international campaigns was then reaffirmed with conviction, including the Global Campaign on Military Spending, the actions for nuclear disarmament with the Nobel Prize ICAN campaign for the accession to the TPNW Treaty, Peace in the Mediterranean and Just Peace and between Israel and Palestine, the Control Arms Campaign, the ENAAT Network on Arms Trade, the Stop Killer Robots campaign or the INEW campaign against explosive weapons.

At the end of the Assembly the internal regulation of the Network was approved, which defines its dynamics and working mechanisms, enlarging also the Executive group that coordinates the common work and that now is constituted by representatives of Cgil, Movimento Nonviolento, ARCI, ACLI, Legambiente, Un Ponte Per, Associazione ONG Italiane, Archivio Disarmo. 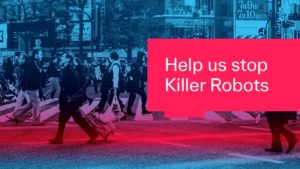